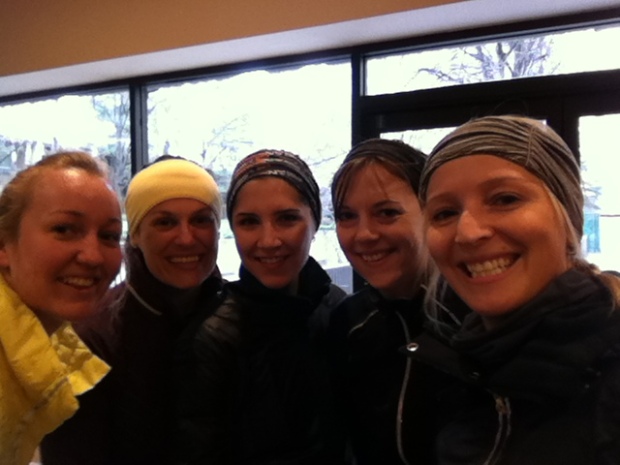 I was honoured to be asked early on to become one of their Digital Champions which meant I was blogging and tweeting about my experiences leading up to the race and during the many community runs. That being said I had already paid my race fee prior to the race as part of my training plan to qualify for the 2014 Boston Marathon, if you want to race fast…then you have to race fast! Overall the organization,  course, and pre and post race festivities were a lot of fun.

With some of my Toronto running family we hit up the pre-race Friendship run and did the shake out 3km on Saturday morning. There were about 20 other runners there with the staff from the Running Room. We had a wonderful run through a random April blizzard  and enjoy post run treats provided by sponsor Subway. We grabbed our race kits and took part in many of the expo festivities which also included a “spin-the-wheel” Commit To Fit adventure where I challenged a giant sandwich to a push up contest – I won a $5 Subway gift card, yum!

Race morning was FREEZING. Like many of the other runners we wore our yellow and blue in support of Boston and took part in the moment of silence prior to the race. The fast 10km starts just North of Yonge and Eglinton and with only 2 small hills at 1 and 2km in it’s all down hill. 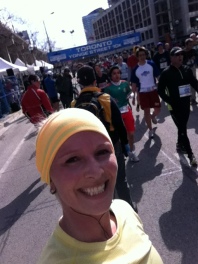 I started off to fast (still working on that trick) and by 6km was starting to slow down. Happily I finished (like MANY other) with a personal best in a time of 49:02. This was my first time racing a 10km run in 2 years, so while I was happy for the PB, I love running downhill and look forward to better pacing next year and shaving even more time off.

The post race festivities at Fort York, were full of fun and food. Live music played, there were opportunities to get your race shift personalized, and shuttle buses to take you back to the race start if that was where you need to go (very thoughtful).

I would highly recommend this race to any Toronto runners. Whether you’re looking for a nice 1st race or the opportunity to crush a PB, this one’s for you!